The Delhi High Court chastises authorities for taking 35 years to decide on a farmer’s application, calling bureaucracy’s “Babudom” a symbol of the colonial mentality. 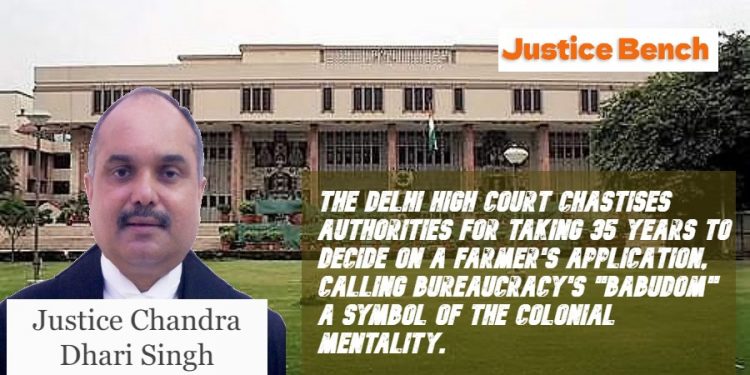 The Delhi High Court chastises authorities for taking 35 years to decide on a farmer's application, calling bureaucracy's "Babudom" a symbol of the colonial mentality.

The Delhi High Court in the case of Shri Ishwar Singh v Land and Building Department and Anr on Monday criticised the “Babu” culture in the Indian bureaucracy, calling it a sign of colonial mindset and a significant barrier to the country’s goal of becoming a developed country, while hearing a farmer’s appeal that had been pending before land authorities for more than 35 years.

It’s high time, according to single-judge Justice Chandra Dhari Singh, that the mindset is banished forever and the people of this nation are freed from such cancerous inclinations and colonial remnants.

Ishwar Singh, a farmer, filed a petition with the High Court claiming that the Delhi Development Authority (DDA) had purchased his land in Maidangarhi in 1987. Although he got compensation, the court was informed that his application for allotment of a substitute parcel of land is still pending.

According to Justice Singh, in its decision dated August 2, 2022, the authorities were given explicit instructions to resolve Singh’s pending application within 15 days of the order’s date, failing which the concerned respondents’ officials had to appear in person before the court.

The judge stated that despite such obvious instructions, the government and its representatives have disobeyed the court’s orders, made no attempts to decide the application, and have not submitted any requests for a deadline extension or an exemption from personal appearance.

This clearly depicts the high-headedness of the officials namely – Vice-Chairman, DDA and Secretary, Land & Building Department

It went on to say that it is alarming that such a stance taken by the concerned officers and their “failure to fulfil their job” has resulted in the filing of numerous petitions before the High Courts across the nation, increasing the backlog and pendency of cases and burdening the judiciary.

According to the court, this amounts to a gross, wilful, and open breach of the court’s authority and is therefore prima facie evidence of contempt of court.

“It was regretfully remarked by this Court even in its last order that the situation depicted a sad state of affairs and travesty of justice that the representations of the citizens of this country have been reduced to mere pieces of paper and the system kept on moving, in its usual snail speed, being least bothered about their grievances. Consequently, their applications have been remaining stacked in files for decades and decades.

The orders passed by a constitutional Court of this country being violated at the sweet will of the officials openly butchers the spirit of Rule of Law.”

The court gave the officials a second chance to appear before it today (Tuesday), along with an affidavit outlining the grounds for disobeying its directives. The officials showed up in court today and submitted an affidavit promising to be cautious and decide the application. They have now been allowed another month by Justice Singh to abide by its directives.