The Delhi High Court has asked the temple board to respond to a petition claiming misconduct in helicopter reservations. 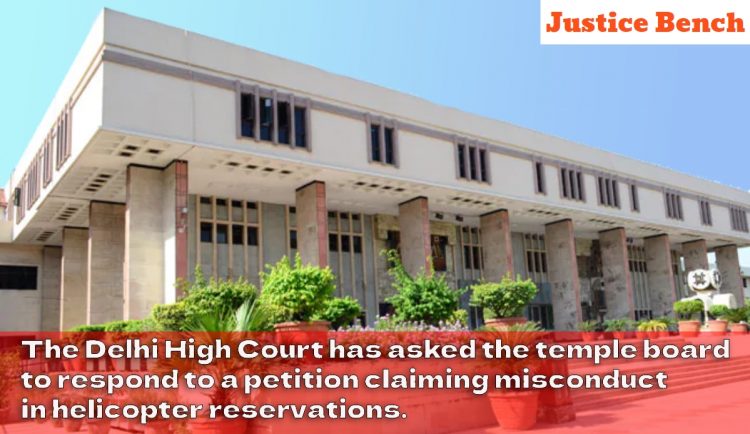 The Delhi High Court has asked the temple board to respond to a petition claiming misconduct in helicopter reservations.

The Contention before the Delhi High court was that When a person wants to book an internet ticket for a helicopter ride, he is routed to websites maintained by helicopter firms that have hired agents, according to the complaint.

On Monday, the Delhi High Court ordered the Shri Amarnathji Shrine Board to answer to a public interest litigation petition alleging malpractices and black marketing by agents when booking helicopter tickets for the Amarnath Yatra.

The Division Bench Comprising Acting Chief Justice Vipin Sanghi and Justice Sachin Datta ordered the temple board to file its response by May 31, when the case will be heard again.

The Court was hearing a plea brought by the Indian Council of Legal Aid and Advice, which was represented by counsel Avadh Bihari Kaushik.

It was said that when a person wants to book an online ticket for a helicopter ride to Amarnath, he is routed to the websites of the helicopter firms, which employ agents.

The petitioner claims that these brokers are already in Jammu and Srinagar, charging high charges for the packages, causing financial damage to the government and the shrine board.

The shrine board was consequently given instructions to create its own portal, similar to the IRCTC, for ticket buying.

Counsel for the shrine board, on the other hand, stated that the procedure is already beginning and that everything will be published on its website in a few days.