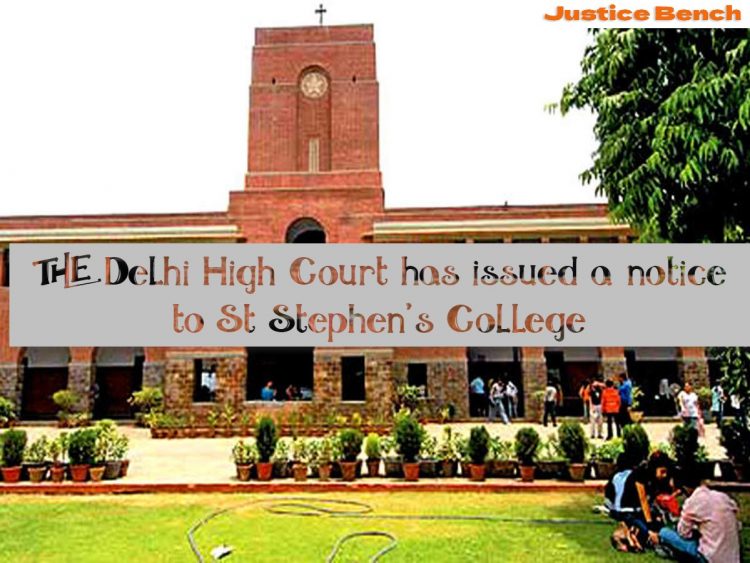 The petition asked for a directive to St. Stephen’s College to conduct admissions to its unreserved undergraduate seats solely on the basis of students’ CUET scores.

On Wednesday, the Delhi High Court served notice on Delhi University (DU) and St Stephen’s College in response to a public interest litigation (PIL) petition challenging the college’s decision to hold interviews in order to admit students to general seats rather than DU seats.

Konika Poddar, a law student, petitioned for a directive to St. Stephen’s College to admit students to its unreserved undergraduate seats solely on the basis of their performance in the Central Universities Common Entrance Test (CUET), as required by DU.

On July 6, the case will be heard again.

In April 2022, DU issued a notice stating that admission to unreserved seats in minority colleges such as Stephen’s should be based solely on CUET merit.

St. Stephen, on the other hand, refused to follow the policy and declared that, even for unreserved seats, the CUET score would be given 85 percent weight and interviews would be given 5%.

Poddar is now challenging this on behalf of hundreds of students. Poddar claimed that the students want to enrol in the unreserved seats at St Stephen’s but refuse to participate in an interview, which is against DU policy.

Poddar argued in his petition, filed through advocate Akash Vajpai, that DU rules apply to St Stephen’s College regardless of its minority status.

She also argued that a minority institution could not ignore merit-based admissions or student selection.

The National Education Policy has clearly elucidated that the entrance to higher education should be through common entrance test at the national level so that there is uniform standard of bench marking of candidates,”