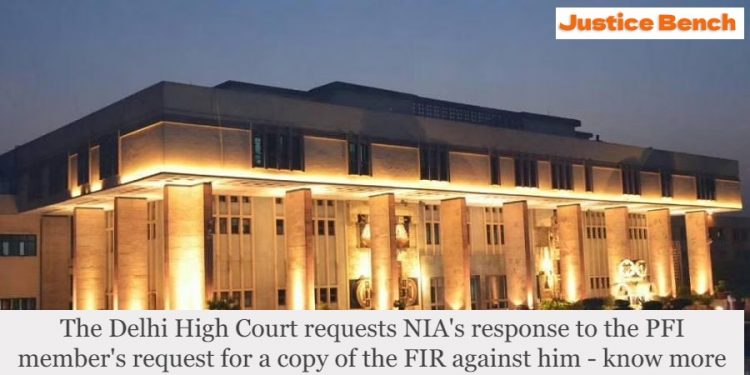 Mohammad Yusuf, an activist for the Popular Front of India (PFI), filed a petition on Friday asking for a copy of the first information report (FIR) in the case in which he has been detained. The Delhi High Court sent notice to the National Investigation Agency (NIA) in response.

On Monday, October 10, Justice Anoop Kumar Mendiratta retained the case for additional review. The accused has been charged with criminal conspiracy, inciting animosity between groups, and violating a number of UAPA rules (UAPA).

When Yusuf went before the court, he said that the NIA had detained him and seventeen other people, but that neither the NIA’s justification for the arrest nor the specifics of the offences were given to him. He was allegedly denied access to the FIR and remand application, which was a blatant breach of Section 50 of the Code of Criminal Procedure, according to the appeal (CrPC).

The argument made in the plea was that although an application was made to the Additional Sessions Judge (ASJ) when the defendant was brought before him, the court rejected the application on the grounds that the matter is sensitive and that releasing a copy of the FIR would impede the investigation.

The appeal contended that this order was made despite the fact that the judgement in the Youth Bar Association case explicitly stated that an accused is entitled to receive a copy of the FIR even in serious situations upon submitting an application for a certified copy of the FIR before the relevant court.

On September 28, the Central government banned PFI for five years and deemed it to be illegal under Section 3 of the UAPA. More than 100 of its purported members and activists were taken into custody as the NIA conducted searches across the nation. The group has been charged with engaging in “illegal acts” that threaten the integrity, sovereignty, and security of the nation.