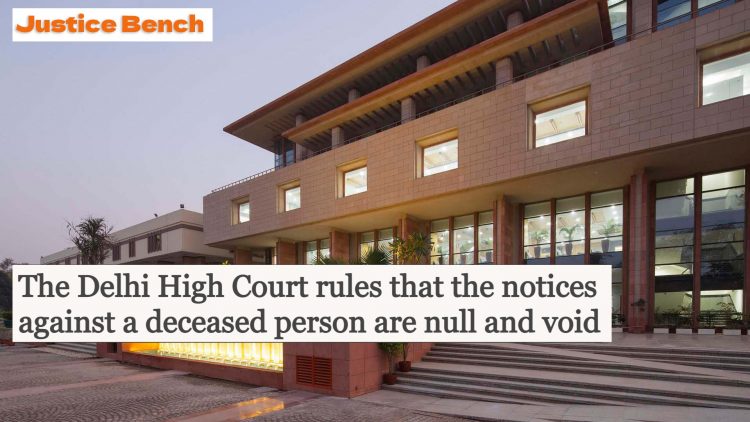 The Delhi High Court Division Bench of Justice Jyoti Singh and Justice Anoop Kumar Mendiratta, JJ. recently struck aside notifications given to a deceased assessee notwithstanding the fact that the family had been informed of his death.

The petitioner, who is the son of the dead assessee, Late Mr. Amrit Thapar, filed the instant suit challenging the impugned notices for the assessment year 2013-14.

The Notice stated that income chargeable to tax for the assessment year 2013-14 had escaped assessment under Section 147 of the Act and that Respondent 1 had been given 30 days to file a return in the prescribed form under Section 148 of the Income Tax Act, 1961 (hereinafter referred to as the ‘Act’).

The impugned notices are illegitimate in the eyes of the law since they were issued against a deceased individual, according to counsel for the petitioner, because the assessee’s death was duly informed by his wife by sending his death certificate.

“the notice under Section 148 of the Act against a dead person was held to be null and void and all consequential proceedings/orders, including the assessment order and subsequent notices were set aside.”

The Court thus sets aside the impugned notices as they were sent against a deceased person.