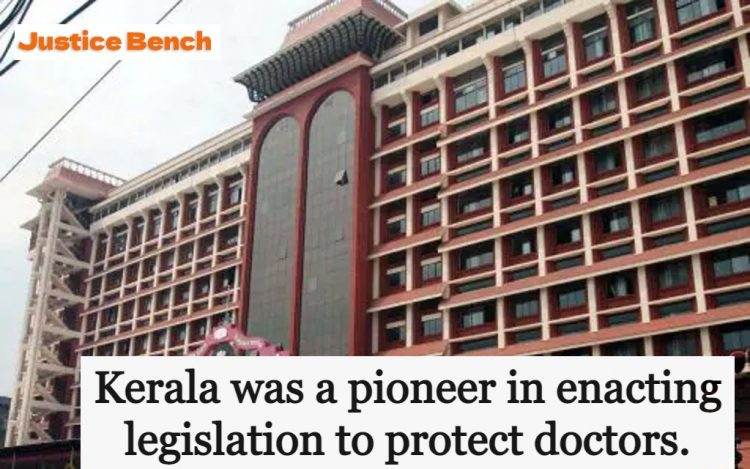 The Kerala High Court ruled that Kerala was a pioneer in enacting legislation to protect doctors.

On Thursday, a Kerala High Court bench led by Justice Bechu Kurian Thomas noted that the state has been a pioneer in enacting legislation to safeguard doctors and other healthcare professionals.The Kerala Health Service Persons and Health Care Services Institutions (Prevention of Violence and Damage to Property) Act was enacted in 2012, before the present pandemic situation underlined the need for such legislation.

“The message has to go that doctors cannot be attacked. That is why the statute was created…Kerala is a pioneer in this statute, it is a role model,“

The Court stated that attacks on doctors cannot be tolerated, regardless of the circumstances, because doctors are responsible for a large number of patients, and an incidence of abuse can harm them as well.

“You cannot abuse or attack a doctor or a hospital. How will the doctors feel? You are not the only life that he or she is taking care of. There is another patient waiting over there. If you attack the doctors, they will not be able to perform well while taking care of the others under their care,”

The Court surmised that the State legislature established the regulation that makes even abusing doctors a non-bailable offence, and Justice Thomas imagined a scenario in which advocates would take the place of doctors.

“Imagine that a case that you argue ends in dismissal or it ends against you. Then the client starts attacking you. This triggers a continuous process. Once one lawyer’s client starts attacking, other lawyers’ clients will also start attacking. If it goes unchecked, there will be one lawyer is every case who is going to get attacked. Similarly, doctors are trying their level best,“

The Court was examining an anticipatory bail motion filed by a man in a case in which he reportedly abused doctors and workers, as well as destroying hospital property, after his wife, who had been admitted with a negative covid test, tested positive with the virus after only one day at the hospital.

Even if there had been a legal breach, the Court stated that the petitioner had no right to take the law into his own hands.

The Court ordered the concerned hospital’s counsel to obtain directions on the matter and adjourned the case.