The Madhya Pradesh High Court has asked the state to respond to a petition seeking a judicial investigation into the demolition of Khargone. 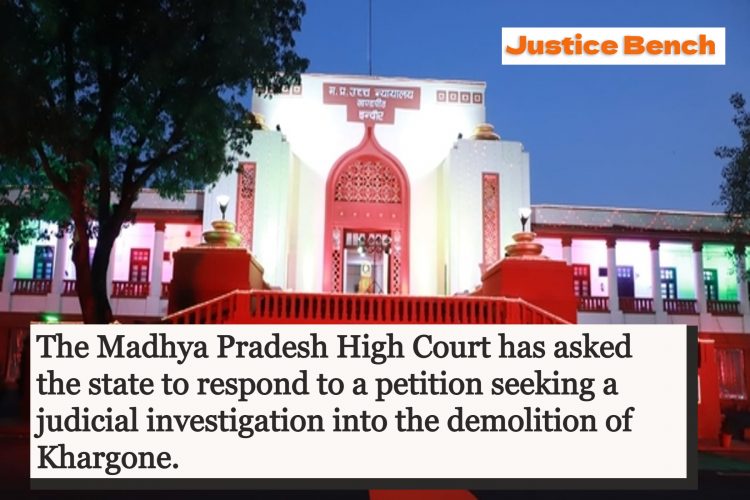 The Madhya Pradesh High Court has asked the state to respond to a petition seeking a judicial investigation into the demolition of Khargone.

The Indore Bench of the Madhya Pradesh High Court has sought the State government’s answer to a suit seeking a judicial enquiry into the demolition of houses and business establishments in MP’s Khargone following riots on Ram Navami.

The petition submitted by Jahid Ali, alleging that he was the legitimate owner of a property that was demolished without notice and in breach of natural justice principles.

“Till next date of hearing, status-quo with respect to the property in question shall be maintained by the parties,”

Such demolitions were “illegal, arbitrary, and inhumane,” according to the plea.

According to the plea, on Ram Navami, certain miscreants instigated riots between two Hindu and Muslim communities. Following that, the respondents, working in concert, demolished the Muslim community’s homes, including the petitioner’s shop.

According to the petitioner, his shop in Khargone, together with other properties, was demolished on April 11, 2022 without following due process of law or affording adequate opportunity to be heard, resulting in the loss of property and livelihood.

“The present petition is being filed for taking cognizance of the illegal act of demolition while respondent authorities action as a judge, jury and executioner,”

The Petitioner pleaded in plea

Aside from a judicial investigation into the State’s activities, the petitioner requested compensation for his loss and that of individuals who were unable to approach the court to vindicate their rights due to financial and moral incapacity.

“No opportunity was given to shift the material inside the constructed shop so as save the valuable items worth 40- 50 lakhs from getting damaged. In this manner due to arbitrary and reckless action of the respondents the petitioner has suffered heavy loss,”

A similar appeal has been filed before the Supreme Court, asking for a free and fair investigation into the demolition of accused rioters’ homes by a court-monitored special investigation team (SIT).

The case was filed by persons who had been harmed by the destruction, and it asked the Supreme Court to intervene immediately to stop what it called the local government of Khargone’s “illegal and arbitrary acts.”