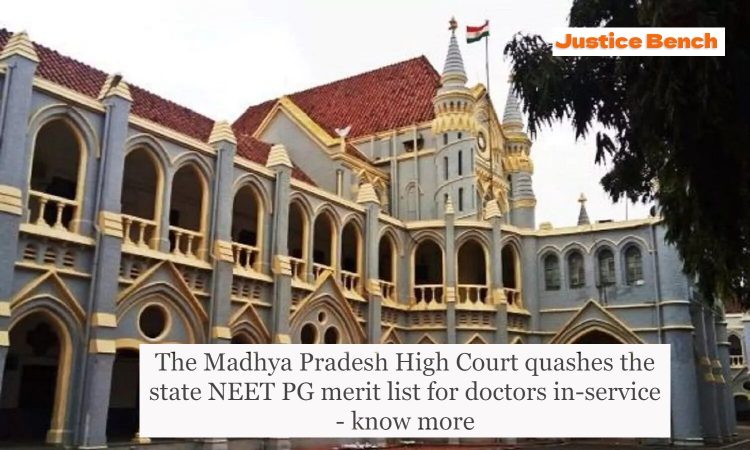 The state administration was ordered to create a new list of qualified candidates and hold the counselling session all over again by a division bench that included Chief Justice RV Malimath and Justice Vishal Mishra.

The court was deliberating a number of petitions submitted by a number of medical professionals working in district hospitals around Madhya Pradesh. The doctors who filed the case qualified for admission to PG medical programmes on May 25 this year through the NEET exam, according to the plea.

On July 26, 2022, the MP government amended the Madhya Pradesh Chikitsa Shiksha Pravesh Niyam, 2018 (2018 Rules) to add a proviso that excluded such “in-service” physicians who had solely worked in district level hospitals and district health care centres of the State.

Only doctors who had worked in remote or rural areas for at least three years were qualified for the 30% reservation under the new guidelines. In light of this, the petitioners contested the proviso, claiming it was arbitrary and unjustified.

Despite the fact that the MP government’s 2018 Rules included a 30 percent quota reservation for all registered medical officers, the MP government contended that the 2022 amendment was introduced to limit the reservation to “only those in-service candidates who have put in service in rural/remote and difficult areas.”

The MP government claimed that the amendment was in line with a Supreme Court ruling from the case of Tamil Nadu Medical Officers Association and others v. Union of India and others, which was decided in 2021.

According to the MP government, the Supreme Court judgement stated that medical officers who serve in remote, difficult, and rural areas should automatically have an edge over doctors who have not provided their services in these places.

The High Court ruled that the additional proviso could not be inserted mid-session even though it accepted the State’s argument that the modification was legally acceptable.

As a result, it was decided that the modification would be prospective and would not apply to the current class of physicians.

We have concluded that the impugned amendment is prospective and cannot affect the present batch of doctors,

The state administration was ordered by the court to create a new list of qualified applicants.