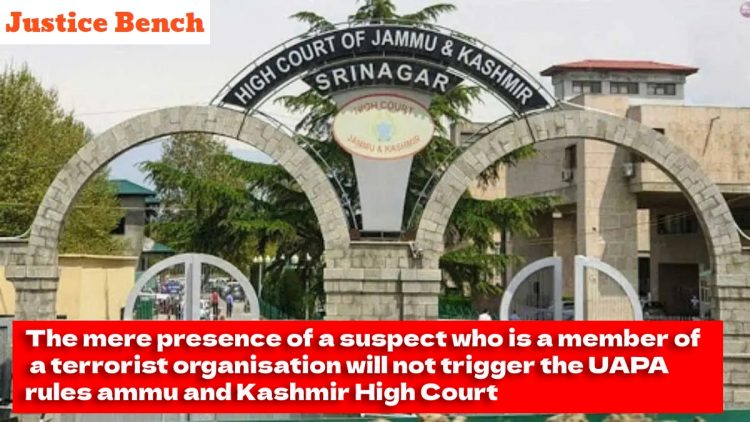 The Jammu & Kashmir and Ladakh high court comprising Justice Sanjeev Kumar and Justice Vinod Chatterji Koul in the case of Waheed ur Rehman Parra V/s UT of J&K through Investigating Officer, P/S Counter Intelligence observed that simply because a person was seen on some occasions with a person of doubtful credentials, cannot by itself lead to the conclusion that such a person is a member of a terrorist organization.

The High Court of Jammu & Kashmir and Ladakh has held that simply seeing someone with a member of a terrorist organisation will not be enough to trigger the provisions of the Unlawful Activities (Prevention) Act (UAPA).

The division bench comprising Justices, led by Justice Sanjeev Kumar and Justice Vinod Chatterji Koul, held that simply because a person was seen with someone with questionable credentials on a few occasions does not imply that that person is either a member of a terrorist organisation or is lending support to one with the intent of furthering its activities.

“Merely the accused having been seen in the company of a member of a terrorist organization without doing anything more is not enough to attract the applicability of UAPA Act,”

As a result, the Court granted bail to one Waheed ur Rehman Parra (appellant), who was charged with sedition under Section 124A of the Indian Penal Code as well as violations of the United Arab Emirates Penal Code.

A first information report (FIR) had been filed in Police Station Qazigund against one Syed Naveed Mushtaq and others under Sections 18, 19, 20, 38, 39 of the UAPA, as well as Sections 7/25 of the Arms Act and Section 3/4 of the Explosive Substances Act.

Following that, the National Investigation Agency (NIA) took up the investigation of that case, and the case was re-registered on January 17, 2020, with the appellant being arrested.

The appellant applied for bail in the Jammu Court of the 3rd Additional Sessions Judge. During the pendency of the bail plea, the respondents filed a second FIR on the same set of charges that were the focus of the investigation.

The appellant was detained in the second FIR as soon as he was freed on bail.

It was claimed that this was done solely for the purpose of illegally and wrongfully detaining the appellant. The appellant’s constitutional rights have been blatantly violated, according to the plea.

He also argued that in rejecting the appellant’s bail request, the trial court failed to consider the fact that the allegations against the appellant were not made out in the charge sheet or the evidence gathered during the investigation, and that he had already been granted bail based on the same allegations.

He claimed that the second FIR filed at CIK Srinagar was only for the purpose of overturning the bail granted by the Special Judge of the NIA Court in Jammu in the earlier FIR.

The High Court stated that the trial court failed to appreciate the situation in its entirety and dismissed the appellant’s bail application based on the fact that charges had been filed against him, and that it is not open to the appellant to argue that the allegations in the FIR do not establish a prima facie case.

The Court further pointed out that the prosecution was relying on evidence gathered throughout the inquiry, but that the evidence only pointed to the appellant being seen in the company of one Yousaf Gadoora, an accused overground worker of a proscribed terrorist organisation.

“Prima facie, we could not find any allegation in the final report which shows the association of appellant with any terrorist organization, that too, with an intention to further its activities,”

The Court noted that there was no evidence on the record that the appellant aided or abetted any terrorist organisation with the goal of furthering its activities.

“Simply because the appellant has been seen on some occasion with a person with doubtful credentials cannot itself lead to the conclusion that the appellant is either a member of a terrorist organization or is lending support to such organization with an intention to further its activities,”

Furthermore, the Court followed the Supreme Court’s recent directives in the sedition case, in which the top court ordered that all current trials, appeals, and actions involving Section 124A of the IPC be put on hold.

As a result, the Court granted the appeal and ordered the appellant’s release from the Central Jail in Srinagar, providing he is not implicated in any other case.