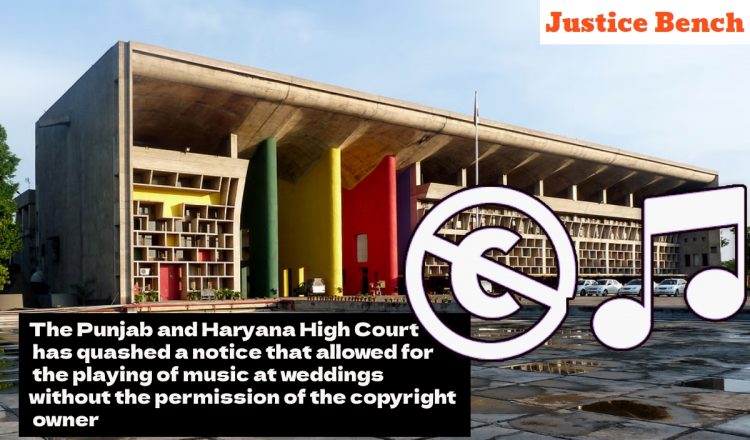 A public notice issued by the Registrar of Copyrights that allowed sound recordings to be played at religious rituals and wedding processions without getting a permission from the copyright owner was recently rejected by the Punjab and Haryana High Court.

The notice offering such a broad exemption, according to single-judge Justice Raj Mohan Singh, violates the Copyright Act’s protections for copyright owners.

Novex Communications Private Limited, a corporation that owns copyright to a huge number of sound recordings from well-known music labels such as Zee, Eros, Tips, and others, filed a writ petition with the court.

The Registrar of Copyrights (respondent) issued a notice on August 27, 2019, interpreting Section 52(1) za of the Copyright Act to mean that using any sound recording during a religious or marriage ceremony does not constitute a copyright infringement, and thus no licence is required to play such songs during such events.

The petitioner went to the High Court, claiming that such an interpretation of codified law is under the judicial domain, or that it falls under the legislative domain as a clarification and amendment.

As a result, it was argued that the respondent lacked the authority to undertake a legislative duty.

The Court stated at the outset that the question of whether sound recordings can be played at social occasions such as weddings is no longer res integra (not examined/decided) and has been resolved by a number of decisions, notably M/s Phonographic Performance Ltd. v. State of Punjab.

Section 52 exempts live performances of such works when there is no commercial motive, no entry price, and they are utilised only for educational, religious, or charity purposes and not for financial benefit, according to the single-judge.

As a result, the Court stated that the question of whether particular activities belong under the exempted categories mentioned in Section 52(1) of the Act must be decided on the facts of each case.

Under section 52(1) za of the Copyright Act, there cannot be a blanket exemption for marriages and similar functions, and in circumstances where such exploitation was for commercial objectives, the owners would be entitled to both civil and criminal remedies under the Act, the Court judge stated.

“The question whether certain acts would fall within the exempted categories as enumerated under Section 52(1) of the Act has to be decided according to facts of each case. In view of aforesaid, there cannot be general interpretation to the provision as given in the impugned public notice/letter,”

It was also noted that the challenged public notice could be used by notorious elements to play sound recordings in commercial premises for commercial advantage.

Furthermore, the Court stated that the Registrar of Copyright lacked the power to issue such a notification because he lacks the authority to clarify or interpret the law’s applicability under the Copyright Act.

“The impugned public notice was also violative of the doctrine of separation of power as an attempt had been made by respondent No.2 to usurp the legislative power of enactment and judicial power of interpretation,”

Furthermore, it infringes on the petitioner’s right under Article 19(1)(g) of the Indian Constitution and overrules copyright provisions, according to the judge who quashed the notice.