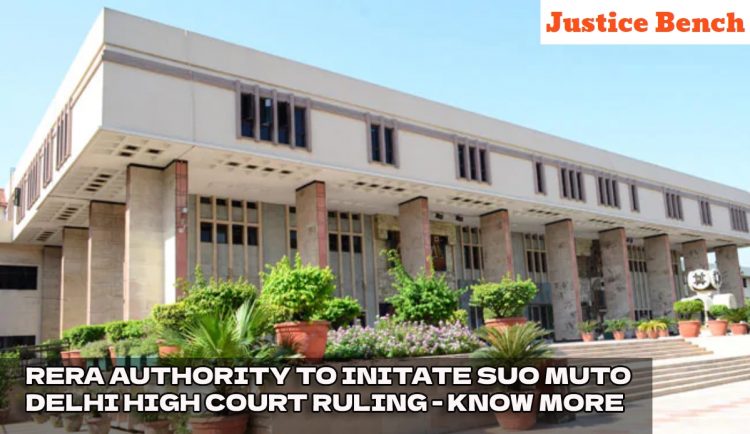 The Delhi High Court has ruled that the Real Estate Appellate Tribunal (Appellate Tribunal) does not have the authority to commence cases on its own, while dismissing proceedings brought by the tribunal to monitor development activity in the National Capital Territory.

“The Act does not vest or confer any authority or jurisdiction upon the Appellate Tribunal to initiate proceedings on its own motion,”

In this matter, the Appellate Tribunal had initiated suo moto proceedings in the national capital against a number of residential and commercial projects, as well as construction activities associated with them, and had issued restriction orders against them.

It also issued an injunction prohibiting any construction work, whether residential or commercial, until the project was registered under the RERA Act.

Praveen Chhabra, a construction developer, filed a complaint with the High Court after learning that the plans he had submitted could not be authorised due to the Appellate Tribunal’s decision.

The Court found that the Appellate Tribunal failed to consider the full ambit of the Act.

“The Appellate Tribunal proceeded on the incorrect and unfounded premise that all projects were liable to be compulsorily registered under the Act,”

According to Sections 43 and 44 of the RERA Act, which provide for the establishment of tribunals and the definition of what disputes can be brought before such tribunals, the Appellate Tribunal was established as a forum whose jurisdiction could be invoked by a person aggrieved by an order, decision, or direction of the Authority.

The Appellate Tribunal, said the High Court, is not part of traditional judicial institutions because it was established by statute.

“The Appellate Tribunal is a creation of statute. It is not an authority which may be recognised as being vested with inherent powers. …Tribunal is not part of the hierarchy of traditional judicial institutions which constitute the judicial system of our country. It is an appellate forum whose origin and formation stems from the provisions of the Act,”

As a result, the decision prohibiting the building of projects until they are registered with the RERA authority was invalidated by the Court.

“The Court also takes into consideration the significant portent of the direction issued. It has practically injuncted all construction activity in the NCT of Delhi. The aforesaid injunction is not shown to have been preceded by any enquiry with respect to the validity of a particular project or even a prima facie assessment or evaluation of the validity of a single project,”

The Court Quashed proceedings after stating so

The judge underlined, however, that he was not interfering with the Authority’s ability under the RERA Act to independently review specific projects.

Amicus Curiae in the case was Senior Advocate Rajeev Mehra.