The SC rules, The employee’s ungainful employment can be ground to Claim Back Wages 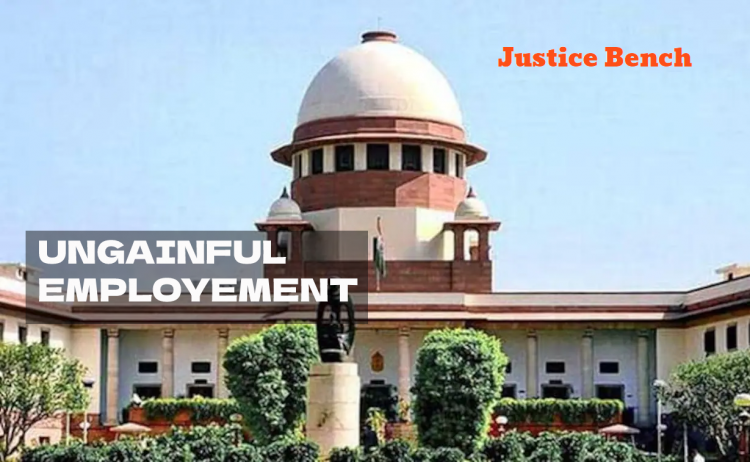 The Supreme Court recently ruled that an employee whose services are terminated and to claim his back wages they have to either plead the same, state at the first instance that they are not gainfully employed or was employed on lesser wages prior to their dismissal from service and only then the burden of proof will shift to the employer.

The petitioner was appointed as a clerk at Allahabad Bank and was prompted in 1982. Then in 1998 charges of making indiscriminate advances and for not verifying customers’ identities were framed against him under Regulation 24 of Allahabad Bank Officer Employees’ Conduct Regulations.

subsequently, A departmental inquiry was initiated and its report was sent to the Disciplinary Authority which confirmed the findings but remarked that cogent reasons were not given. Later, the Authority independently analyzed the evidence and found the accused guilty. Which triggered his dismissal from service.

After the petitioner’s appeal and revision plea was dismissed he approached the Allahabad High Court. The petitioner submitted before the High Court,that in light of Regulation 9 of the Regulations he should have been given the inquiry report and the High court agreed.

Subsequently, the Bank informed the petitioner that the inquiry report was untraceable. Even though the petitioner’s contempt plea was dismissed, the High Court set aside the impugned orders and ordered the petitioner’s reinstatement with 50% back wages and the bank challenged the same in Top Court.

To settle the issue, the court reiterated that ordinarily the employee who is desirous to get back wages should plea the same or state at the first instance that he was not gainfully employed after dismissal or was working on lesser wages and then only the burden of proof would shift on the employer.

Further, the petitioner has placed nothing on record to show that he wasn’t gainfully employed after dismissal the court observed and allowed the Bank’s appeal.