The Supreme Court has set aside the Delhi High Court’s stay on the SFIO investigation of the Sahara companies. 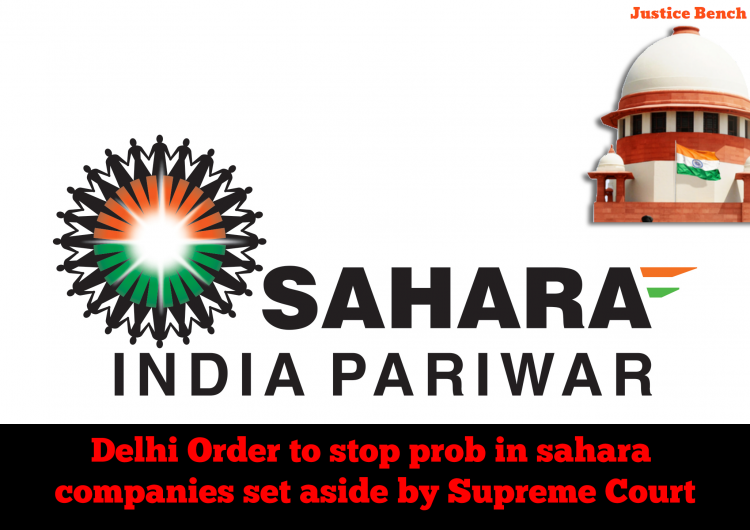 The High Court ruling was set aside by a vacation bench comprising Justices DY Chandrachud and Bela Trivedi, who found that staying the probe at an intermediate stage was incorrect in Serious Fraud Investigation Office & Ors. v. Sahara Housing Investment Corporation Limited and Ors. case

The stay issued by the Delhi High Court on the operation, execution, and implementation of the two orders passed by the Central government for investigation into nine entities associated to the Sahara Group was overturned by a vacation bench of the Supreme Court on Thursday.

Allowing the appeals, a vacation bench comprising Justices DY Chandrachud and Bela Trivedi found that the order to suspend the probe at an interim stage was incorrect and overturned it.

“It will be inappropriate at this stage to place the burden of reason till the complete probe is over. High Court was not correct in staying the investigation at interim stage. We allow (present) appeals and set aside the High Court order on stay”

The Bench also stated that their ruling has no bearing on the merits of the writ petition currently before the Delhi High Court.

“High Court shall decide the writ petition without any regard to observations made herein. We request the High Court to expeditiously dispose off the case, preferably within 2 months after re-opening after summer vacations,”

Senior Advocate Kapil Sibal, who was representing Sahara at the stage, pointed out that the current ruling could affect previous challenges filed by the Sahara companies.

The Division Bench, however, emphasised that the current order is restricted to the facts of the current case and will have no bearing on any other cases.

The order from the Delhi High Court stated that the probe would be in violation of the Companies Act.

Solicitor General (SG) Tushar Mehta, arguing for SFIO, stated that the Delhi High Court had stated in its order that the investigation could not be completed in three months and would instead take three years because the total amount involved was one lakh crores and there were multiple layers of companies involved.

Lookout Circulars were issued against the company’s top officials as a result, he explained, in order to prevent them from fleeing the country.

There is no such mandate under the act that if probe is not completed within 3 months , the probe itself will come to an end,”

Before the Bench, the SG underscored

The Bench Ruled it a “exceptional order,” concluding that the DElhi High Court was not warranted in halting the investigation and prohibiting further actions, such as the issue of Lookout Circulars.

“High Court has completely scuttled an investigation which is extraordinary. …It is an extraordinary order. It needs to be stayed,”

The Supreme Court stated and overturned the order,