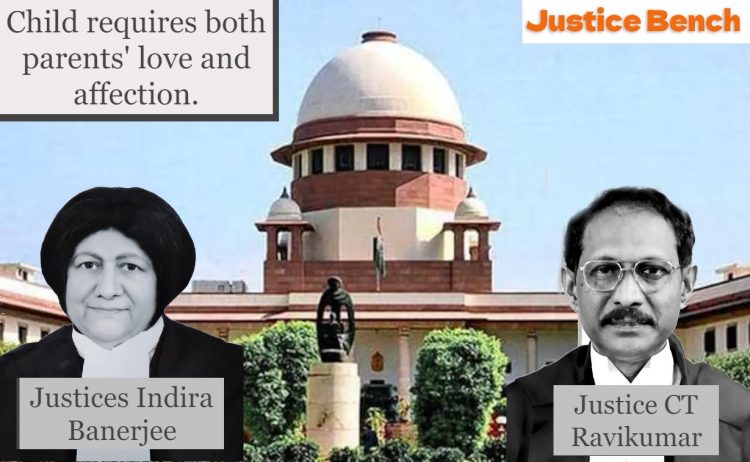 The Supreme Court reaffirms that a child requires both parents' love and affection.

In the case of Himanshu Chordia versus Arushi Jain, a Supreme Court bench led by Justices Indira Banerjee and CT Ravikumar recently reaffirmed that a child has the right to both parents’ love and affection, as well as access to both parents, and that children are happiest when they have both parents.

“We have no doubt that the child needs both parents and the child would be equally happy, if not happier, in the company of the mother as well. The child would perhaps be happiest if he could have both his parents. Unfortunately, the parents are unable to resolve their differences and stay together. Be that as it may, the child has a right to access both parents, and get the love and affection of both parents. Whatever be the differences between the spouses, the child cannot be denied company of his father“

The Court was hearing an appeal filed by a father against a Rajasthan High Court ruling rejecting a plea for interim custody of his little son after a family court had denied the father’s application in July 2021 due to the Covid-19 pandemic condition at the time.

On October 28, 2021, the Rajasthan High Court upheld the lower court’s decision, given the prevailing appeal before the Supreme Court.

The Supreme Court referred the parties to the Supreme Court Mediation Centre in an order dated March 4, 2022. The petitioner was also allowed to travel to Udaipur over the Holi festivities and stay in a hotel, according to the Court. He was allowed to take the child out for a few hours in the afternoon on Holi Day, and then return him to his mother after dinner.

The Court also stated that if the child was cooperative, the petitioner could spend the weekend with the child, i.e. March 19 and 20, 2022, and return the child to the respondent-mother by March 20, 2022. The petitioner brought the youngster out and spent two days with him as a result of this.

When the case was heard on May 20, the petitioner used images to demonstrate that the youngster was happy in his company. In addition, Counsel for the respondent-mother asserted that the respondent can produce similar images.

The Court noted that the child requires the care of both parents, but that the parents are unable to resolve their differences and remain together. As a result, the Bench granted the petitioner-father the right to meet and spend time with the child on their birthday, as well as visitation rights during the summer vacation, assuming the child agrees.

“No pressure should be put on the child. As the COVID-19 situation in the country has improved and life has more or less normalised, the parties may in future approach the Family Court concerned for requisite directions with regard to custody of/access to the child,”

The petitioner was represented by Advocate SS Jauhar, Prabhjit Jauhar, and Aishwarya Makhija.

The respondent-mother was represented by Advocate Ronak Karanpuria and Yogesh Mahur, Sumit Sharma, and Jai Wadhwa.