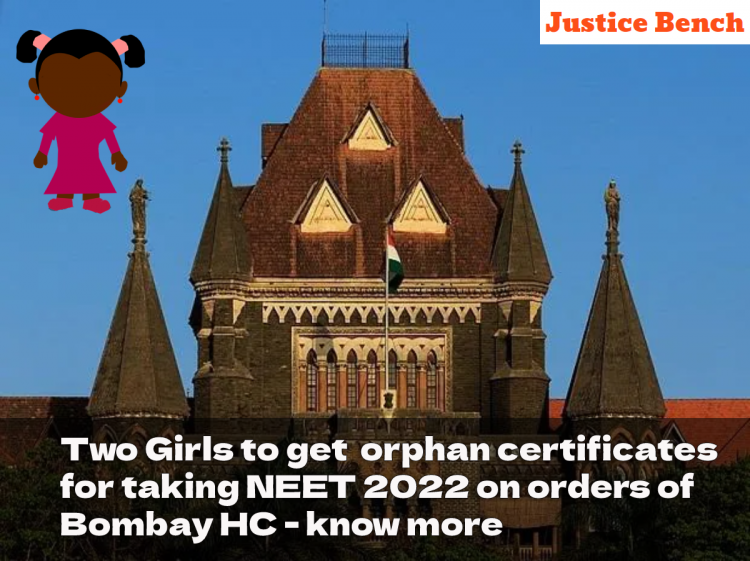 A Division Bench of Justices Revati Mohite Dere and Madhav Jamdar was seized of an interim application filed by Nest India Foundation that looked after orphan girls.

The Division Bench comprising Justices Revati Mohite Dere and Madhav Jamdar stated that the girls had applied for an orphan certificate in 2020 which remained pending since then. The order of bench stated that

“The application is filed about two years back and till date the same is kept pending with the district office. The last date to apply to NEET 2022 to obtain admission in MBBS degree course was May 6, 2022 and the same has been extended for a short period. In view of this, we direct the authorities to issue and grant an orphan certificate to both petitioners, forthwith and in any case, within a period of seven days,”.

The Bench was seized of an interim application filed by Nest India Foundation that looked after orphan girls.

The petition contended that the girls had applied for orphan certificates on November 24, 2020. The Child Welfare Committee, Mumbai Sub-Division recommended their cases to the district office. Ever since their applications remained pending since then.

The trust argued that despite repeated following up on mobile and personal visiting the office of the authorities, the certificates were not issued.

Further, the trust stated that the Women and Child Development Department (Konkan Division) in a communication dated May 6, 2022, stated that there are certain shortcomings in the application.

The bench noted that the authorities failed to inform about the nature of deficiencies in the applications from November 2020 till May 2022,

In a 6-page order, the judges passed the order directing that certificates be issued.

“It is significant to note that the Child Welfare Committee, after considering the entire record recommended that the said students be granted Orphan certificate. Even today the authorities are unable to state the nature of deficiencies,”

The trust was issued a notice on the grounds that the trust is not a registered child care institution under provisions of the Juvenile Justice (Care and Protection of Children) Act, and the Maharashtra State Judicial Justice (Care and Protection of Children) Rules and asking it to shift the 31 orphan girls in it to some other registered orphanage.

The trust also stated that it had applied for registration way back in 2010 but since then its plea is yet to be decided.